What do you do with day old bagels? You make French Toast, of course.  If you haven't tried some of Cindy's French Toast you are missing out!  Cindy takes day old bagels and transforms them into a masterpiece of mouthwatering deliciousness.  You will not be disappointed. 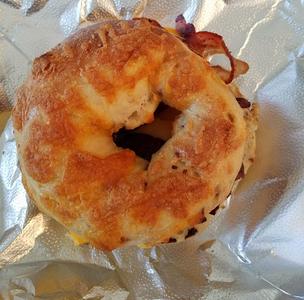 Allergens:  We use products that contain gluten, bacon, egg, cheese, milk and nuts.  Please be aware that we can not be responsible for your choices.  Please ask for ingredients used if you are unsure if our products meet your dietary needs.  Thank you.

(Available flavors on our truck may vary)

The not so secret/secret menu - These have appeared on the menu from time to time but aren't a permanent fixture. Only true fans know these:

The Napolean - A French toast-ified bagel of your choice along with an egg, your choice of meat and cheese, maple syrup and powdered sugar.

The Rizzuto - bacon, cheddar and cream cheese on a everything bagel. Holy Cow!

The Here Piggy Piggy - Bologna, Bacon and Ham with cheddar and egg on a bacon cheddar bagel. You'll need a nap after this one.

The El Nino - Ham egg and swiss on a bagel of your choice! We had to say buh bye to the Asiago bagel (the original bagel for this sandwich) due to a cheese shortage during Covid. Named for our favorite Hurricane's player, Nino Niederreiter, who hails from Switzerland.  Also one of our favorite non-USA countries!

Please note: we do not sell bulk bagels off the truck unless they are pre-ordered! We need to have any special orders in by Mondays of the week we will be out. Please use the "contact us" page to send your request and we will see if we can accomodate. You can also get our bagels at great local coffee shops like BREW at the Cary Theater; BREW at McNeill Pointe; 9Bar Coffee in Riverwood; Carter's Baking Co. in Downtown Wendell; Boulevard West in Downtown Clayton; Larema Coffee in Downtown Rocky Mount; and, The Creative Cup in Downtown Zebulon. For the list of our ingredients, simply click here.

Comes with your choice of available

- or try - (subject to availability)

The Breakfast Club - Everything bagel with ham, turkey, bacon, egg and provolone cheese

The Boss - Pork roll, egg and cheddar on your choice of bagel.